Here are my YA recommendations when it comes to mental health. You can find tons of lists just like this all over the Internet, but these are just a few that I’ve read that really resonated with me. I hope you’ll enjoy, but please be advised ***TRIGGER WARNING*** for depression, suicide, anxiety, and self harm.

This is a story about a teen who checks himself into a mental hospital after a suicidal episode. As he spends time with different patients, he finds the source to his anxiety. The author himself spent time in a psychiatric hospital and sadly took his own life a few years ago.

“Life can’t be cured, but it can be managed.”

Suzette returns home to Los Angeles from boarding school to be with her brother who has been diagnosed with bipolar disorder.

“Lionel said as much to me once, how so many of the same people who are quick to empathize with physical disabilities don’t understand why someone with depression can’t just get up and get on with their day like the rest of the world. It’s like they need a receipt that proves someone is actually going through some shit before they care about them.”

This story set in Australia follows Francesca as she maneuvers her way through an all-boys school that recently went co-ed, as well as a complicated home life with her depressed mother. As with Little & Lion, this is a story of a family member’s mental health and how the main character deals with it.

“This morning, my mother didn’t get out of bed”

“I think we’re made up of all these different pieces and every time someone goes, you’re left with less of yourself.”

When We Collided – Emery Lord

Jonah meets Vivi, who is diagnosed with bipolar disorder, for a summer they would never forget. 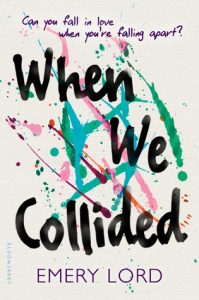 “My dark days made me strong. Or maybe I already was strong, and they made me prove it.”

“Even the constellations can see us now: we are seventeen and shattered and still dancing. We have messy, throbbing hearts, and we are stronger than anyone could ever know.”

Popular Caroline hides her all-consuming worries and OCD from everyone in her life. As she struggles with obsessive doubt, Caroline meets Sam who introduces her to Poet’s Corner, a secret club at school. 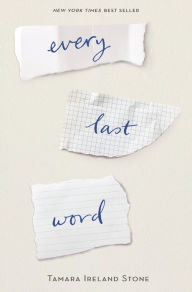 “You seem to know how to articulate your feelings and share them with other human beings. I’m afraid my gift is the exact opposite; I’m skilled at holding everything in.”

“If you could read my mind, you wouldn’t be smiling”

“And I want to stop, but I can’t, because telling someone with OCD to stop obsessing about something is like telling someone who’s having an asthma attack to just breathe normally. My mind needs more information.”

Cath and her twin sister Wren are starting their first year of college, where Wren wants to explore new things and Cath is still stuck in her Simon Snow fandom. Cath struggles with major insecurities and anxieties, only finding solace through writing fanfiction.

“Just… isn’t giving up allowed sometimes? Isn’t it okay to say, ‘This really hurts, so I’m going to stop trying’?”

“I’m scared of everything. And I’m crazy. Like maybe you think I’m a little crazy, but I only ever let people see the tip of my crazy iceberg. Underneath this veneer of slightly crazy and socially inept, I’m a complete disaster.”

Eliza and Her Monsters – Francesca Zappia

Like Fangirl, shy and introverted, Eliza’s whole world is wrapped around her wildly successful web comic, Monstrous Sea. Her life is pretty much all online. She then meets one of her biggest fans, Wallace, they help each other come out of their shells. 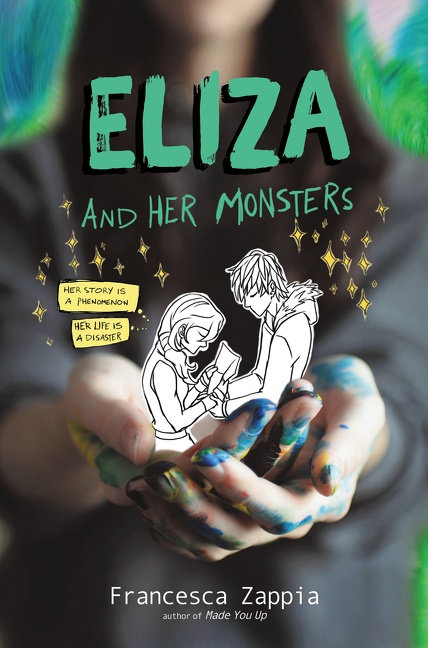 “I’m so tired. I’m tired of anxiety that twists my stomach so hard I can’t move the rest of my body. Tired of constant vigilance. Tired of wanting to do something about myself, but always taking easy way out.”

“There is a small monster in my brain that controls my doubt.
The doubt itself is a stupid thing, without sense or feeling, blind and straining at the end of a long chain. The monster though, is smart. It’s always watching, and when I am completely sure of myself, it unchains the doubt and lets it run wild. even when I know it’s coming, I can’t stop it.”

I’ll Give You The Sun – Jandy Nelson

Following a set of twins, Noah and Jude, through the before and after of a major event that ripped apart their relationship. 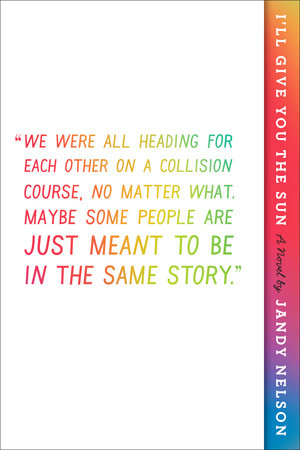 “I didn’t know you could get buried in your own silence.”

I Was Here – Gayle Forman

After getting the news that her best friend, Meg, had killed herself, Cody travels to Washington to pick up Meg’s things from college. She starts to learn all the things her best friend, realizing that Meg wasn’t the person she thought she was.

“She didn’t tell me that she found life to be so unbearably painful. I mean, I didn’t even have a clue.”

“If you’re in the dark, it might feel like you will always be there. Fumbling. Alone. But you won’t — and you’re not.”

Solomon is agoraphobic and hasn’t left the house in three years. Lisa and clark enter his world and they form a special bond.

“He was afraid of the world, afraid it would find a way to swallow him up. But, maybe everyone was sometimes.”

“What he feared the most was that all this hiding had made it impossible for him to ever be found again.”

History is All You Left Me – Adam Silvera

***TISSUE ALERT*** When Griffin’s first love and ex-boyfriend, Theo, dies in a drowning accident, his universe implodes. Even though Theo had moved to California for college and started seeing Jackson, Griffin never doubted Theo would come back to him when the time was right. Griffin’s obsessive compulsions and destructive actions are causing him to slowly spiral out of control. 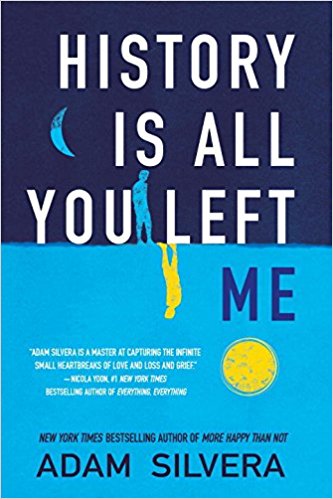 “I feel like a rock being skipped through the ocean—pain, relief, pain again, relief again, eventually destined to sink.”

Turtles All the Way Down – John Green

Aza never intended to pursue the mystery of fugitive billionaire Russell Pickett, but there’s a hundred-thousand-dollar reward at stake and her Best and Most Fearless Friend, Daisy, is eager to investigate. When she realizes Pickett’s son, Davis, is a friend from her past, intentions become blurred. 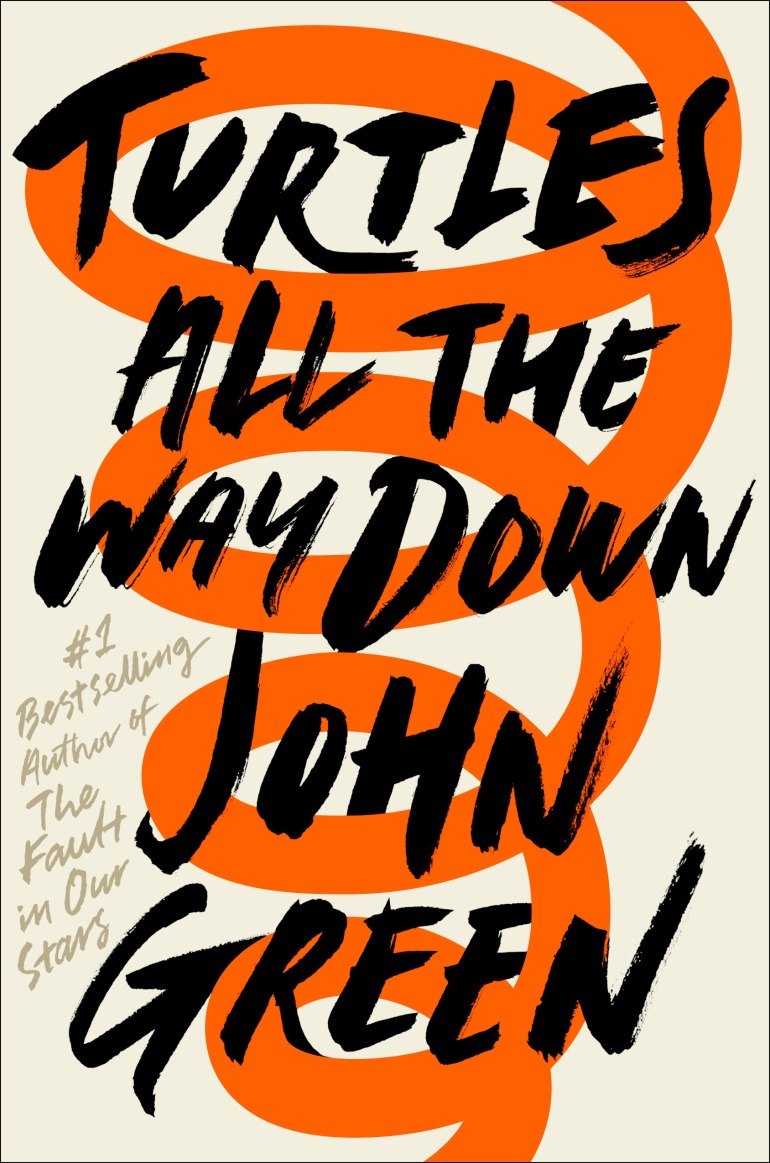 “Actually, the problem is that I can’t lose my mind,” I said. “It’s inescapable.”

“It’s so weird, to know you’re crazy and not be able to do anything about it, you know? It’s not like you believe yourself to be normal. You know there is a problem. But you can’t figure a way through to fixing it. Because you can’t be sure, you know?”

“Myself and the disease were knotted together for life.”

When a new neighbor moves in next-door, he begins to threaten Norah’s life as an agoraphobe. She knows her fears and anxieties are completely irrational but she still can’t make it outside, away from the comfort of her home. 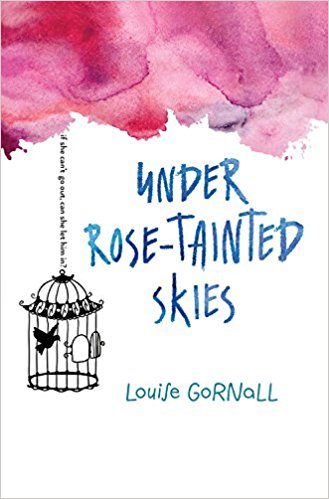 “Mental health is usually the last place people go when they think about someone being sick.”

“See, anxiety doesn’t just stop. You can have nice moments, minutes where it shrinks, but it doesn’t leave. It lurks in the background like a shadow, like that important assignment you have to do but keep putting off or the dull ache that follows a three-day migraine. The best you can hope for is to contain it, make it as small as possible so it stops being intrusive. Am I coping? Yes, but it’s taking a monumental amount of effort to keep the dynamite inside my stomach from exploding.”

This is a rough and dark story following Charlotte through treatment, relapses, first love, and rock bottom. Definitely not for the fainthearted. 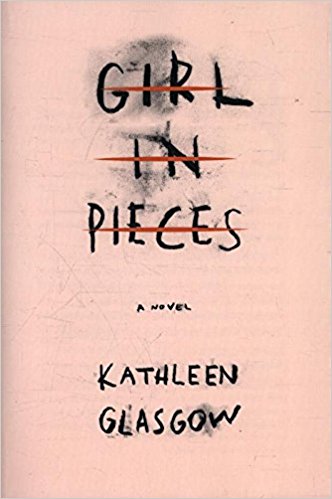 The Perks of Being a Wallflower – Stephen Chbosky

This wildly popular book, Catcher in the Rye for millennials, follows observant Charlie through his first year of high school. This book is told through letters addressed to “Friend,” and tells the reader about everything going on around him through his eyes.

“I am both happy and sad at the time, and I’m trying to figure out how that could be.”

All The Bright Places – Jennifer Niven

Theodore and Violet meet on the edge of the bell tower at their school. the form a connection as they travel around their state, looking for the “natural wonders” around them. 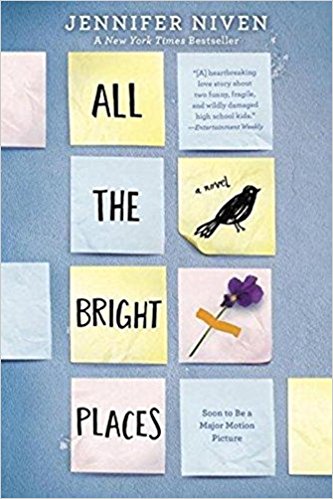 “It’s my experience that people are a lot more sympathetic if they can see you hurting, and for the millionth time in my life I wish for measles or smallpox or some other easily understood disease just to make it easier on me and also on them.”

Miles is new at this fancy boarding school when he meets the mysterious Alaska Young. He is completely enamored with her. 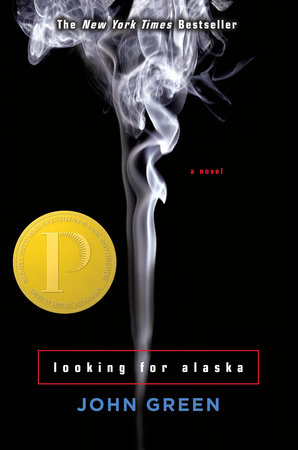 “I always liked quiet people: you never know if they’re dancing in a daydream or if they’re carrying the weight of the world.”

“The only way out of suffering is to forgive.”

Steffi is a selective mute who feels completely invisible, until Rhys becomes a new student at her school.  Rhys is deaf. This perfect match soon fall in love.

“Panic attacks are a lot like being drunk in some ways, you lose self-control. You cry for seemingly no reason. You deal with the hangover long into the next day.”

“And then it happens. The panic. It’s slow at first, creeping through the cracks in my thoughts until everything starts to feel heavy. It builds; it becomes something physical that clutches at my insides and squeezes out the air and the blood.”

I hope you enjoyed this list. Leave me some recommendations of other mental health books.

7 thoughts on “YA Recommendations: Mental Health”