“All my life I’ve had a body worth commenting on and if living in my skin has taught me anything it’s that if it’s not your body, it’s not yours to comment on.”

YA adaptations of 2018 strike again!

Self-proclaimed fat girl Willowdean Dickson (dubbed “Dumplin’” by her former beauty queen mom) has always been at home in her own skin. Her thoughts on having the ultimate bikini body? Put a bikini on your body. With her all-American beauty best friend, Ellen, by her side, things have always worked…until Will takes a job at Harpy’s, the local fast-food joint. There she meets Private School Bo, a hot former jock. Will isn’t surprised to find herself attracted to Bo. But she is surprised when he seems to like her back.

Instead of finding new heights of self-assurance in her relationship with Bo, Will starts to doubt herself. So she sets out to take back her confidence by doing the most horrifying thing she can imagine: entering the Miss Clover City beauty pageant—along with several other unlikely candidates—to show the world that she deserves to be up there as much as any twiggy girl does. Along the way, she’ll shock the hell out of Clover City—and maybe herself most of all. 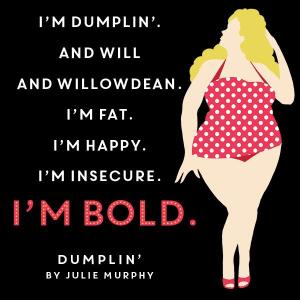 Dumplin’, the 2015 book by Julie Murphy, is really important to me. It was the first book I ever read where I really saw myself in the main character. Willowdean Dickson doesn’t hate herself; she’s a confident young woman who’s fat. She doesn’t let kids at school, strangers, or even her mother tell her how to feel about her own body. Usually when there’s a plus size protagonist, the story is focused on the girl’s weight loss journey. We get none of that here. We are presented with three different fat characters, just living their life. It was refreshing to read. She became one of my favorite main characters—and the fact that she had a cute and swoony boy practically begging her to be with him.

The movie kind of snuck up on me. I remember seeing the release date when it was first announced, but I completely forgot about it until I saw posts from the premiere on Instagram. I absolutely loved that Dolly Parton did an original song and just in general gave clearance to use her music throughout the entire film. She is so important to Willowdean’s story.

Danielle Macdonald was a perfect Will—she was snarky and smart and strong. Her and Jennifer Aniston played off each other as mom and daughter really well. I love that the core girl group of Millie, Hannah, and Ellen had more airtime than in the book but I do wish they would have included the sleepover scene because it was just so entertaining.

And how could I forget Bo. I yearned for more Bo scenes! So much so that I reread the book right after watching the movie do indulge in my love of Bo. He’s so dreamy and thinks Willowdean is beautiful. I’m glad they left out the Mitch storyline because it didn’t add to what the movie was going for.

First they gave us To All the Boys I’ve Loved Before and now Dumplin’, Netflix knows how to appeal to their audience!

One thought on “Dumplin’”