The youngest doctor in America, an Indian-American teen makes her rounds―and falls head over heels―in the contemporary romantic comedy Symptoms of a Heartbreak.

Fresh from med school, sixteen-year-old medical prodigy Saira arrives for her first day at her new job: treating children with cancer. She’s always had to balance family and friendships with her celebrity as the Girl Genius―but she’s never had to prove herself to skeptical adult co-workers while adjusting to real life-and-death stakes. And working in the same hospital as her mother certainly isn’t making things any easier.

But life gets complicated when Saira finds herself falling in love with a patient: a cute teen boy who’s been diagnosed with cancer. And when she risks her brand new career to try to improve his chances, it could cost her everything.

It turns out “heartbreak” is the one thing she still doesn’t know how to treat.

In her solo debut, Sona Charaipotra brings us a compelling #ownvoices protagonist who’s not afraid to chase what she wants. Symptoms of a Heartbreak goes from romantic comedy highs to tearjerker lows and is the ultimate cure-all for young adult readers needing an infusion of something heartfelt.

This was such a unique story! It’s rare to find a new and original story idea nowadays and this definitely was a breath of fresh air.

I was a big fan of Charaipotra’s Tiny Pretty Things duology that she co-wrote with Dhonielle Clayton, so I was excited to read her debut as a standalone author. She really didn’t disappoint.

Our main character, “Girl Genius” Saira was the best.  She’s the youngest doctor in America at the age of 16, and she holds zero arrogance when it comes to others and her abilities. It could have been so easy for her to have an air of entitlement—which someone unjustly accuses of her—but she is just a regular teen who happens to live a very different life. She stands up for herself and does so with humor and charisma—she is very confident in her abilities. I found this to be a very smart and interesting way to tackle the sick kid trope that is very popular in YA these days.

I think Charaipotra also did really great things with the releationships in this book. The situation with Saira and her friend Lizzie was pretty tricky, but it ended up being a really great way of handling a change in friendship. They have things going on in their own lives  that the other can’t relate to. All Saira wants to do is to hold on because she doesn’t think she can continue life without that friendship. I think it’s the same with her relationship with Vish—he is kind of her security blanket and she doesn’t know what she’ll do when he moves on from her. Another thing I loved was her incredible relationship with her sister. Taara could have easily been very jealous and spiteful of her sister because of the attention from not only their large family, but also complete strangers, but she was extremely supportive and was there for her, every step of the way.

Surprisingly, the one thing I didn’t love was the romance. There was nothing wrong with it per say, I just think the story would have been stronger without it. It wasn’t really the central plot line, so it didn’t bother me that much, but for once, I don’t feel like it was needed.

All in all, I thought this was a really strong and unique story with great characters and relationships. 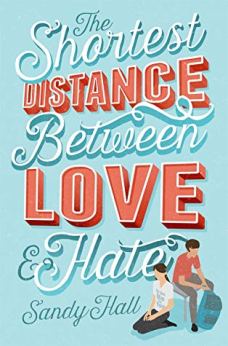 A teen girl starting at a new school is torn between long-held loyalties and a bright new love.

Paisley is really looking forward to college. She is ready to take charge of her destiny and embrace some new experiences! Finding a hot guy to make out with at her first ever college party seems like a great start . . . until her best friend informs her that mystery guy is actually Carter Schmitt, Paisley’s sworn enemy who basically ruined their lives in middle school.

So much for new people and exciting new experiences. Oh well. Paisley will just pretend he doesn’t exist. Of course that would be easier if Carter, AKA her super-hot-sworn-enemy, hadn’t ended up in three of her classes AND the same work study. Is it too late to rethink this college thing?

This was a very quick read, so quick that I read it in one sitting. But being a quick read isn’t always a good thing.

Right away I was excited to see that it was set in college. There are not enough YA books that take place in college. I loved the beginning of this book. We jumped right into the story with our two main characters at their first college party during orientation weekend for school. They are soon thrust into a whirlwind romance that only lasts a few days before our female lead, Paisley, learns who her dreamy college boy really is—her middle school bully.

I hated Paisley. She was mean, self-centered, and arrogant. She would ask her friends for advice and then dismiss anything that they told her. Well, why did you ask if you were just going to do what you wanted to do?Carter (love interest) didn’t deserve all her crap—he apologized a million times and was trying to convince her that he had changed. It had been four years, for goodness sake. I definitely don’t think I would have carried so much for Carter and his story if this wasn’t in dual perspective. In general, the characters definitely didn’t sound like they were in college—more like early high school. Also, the plot got really repetitive. I feel like we just bounced back and forth between their work study assignment to the dorm then back to work. Maybe a scene here and there from outside a classroom but other than that, it was starting to get redundant and boring.

I do think this would have been a good short story or novella. There was so much unnecessary filler that just didn’t belong. It could have paired way down and had more focus on just their relationship and history—making it more of a short story showing the journey they went through together.