These two books have a few things in common: love letters to cities on the West Coast, a strict timeframe, and a good ol’ fashion enemies-to-lovers trope. 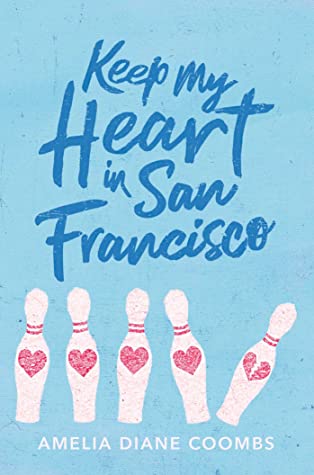 Sparks fly when two ex-best-friends team up to save a family business in this swoon-worthy and witty debut perfect for fans of Jenn Bennett and Sarah Dessen.

Caroline “Chuck” Wilson has big plans for spring break—hit up estate sales to score vintage fashion finds and tour the fashion school she dreams of attending. But her dad wrecks those plans when he asks her to spend vacation working the counter at Bigmouth’s Bowl, her family’s failing bowling alley. Making things astronomically worse, Chuck finds out her dad is way behind on back rent—meaning they might be losing Bigmouth’s, the only thing keeping Chuck’s family in San Francisco.

And the one person other than Chuck who wants to do anything about it? Beckett Porter, her annoyingly attractive ex-best friend.

So when Beckett propositions Chuck with a plan to make serious cash infiltrating the Bay Area action bowling scene, she accepts. But she can’t shake the nagging feeling that she’s acting reckless—too much like her mother for comfort. Plus, despite her best efforts to keep things strictly business, Beckett’s charm is winning her back over…in ways that go beyond friendship.

If Chuck fails, Bigmouth’s Bowl and their San Francisco legacy are gone forever. But if she succeeds, she might just get everything she ever wanted.

This was a really strong debut. Don’t let the seemingly sweet cover fool you, this book has some depth. Chuck and Beckett decide to hustle bowlers to make money and save her family’s bowling alley—they only have 10 days to make $8,000.

The mental health aspect was interesting. Chuck is afraid she’ll end up like her bi-polar mother, especially once she experienced her own depressive episode. All the relationships were really special and unique. Chuck and her dad are very close, as well as her aunt who lives with the family. Her Aunt Fiona is almost like an older sister.

I wish the relationship was paced a little better. They never really made it to the friend stage before skipping to love. They were friends for so many years and after a year of total silence following a fight, I feel like friendship should have been the first step.

This was fun and I’ll definitely read from Amelia Diane Coombs in the future.

The Hating Game meets Nick and Norah’s Infinite Playlist by way of Morgan Matson in this unforgettable romantic comedy about two rival overachievers whose relationship completely transforms over the course of twenty-four hours.

Today, she hates him.

It’s the last day of senior year. Rowan Roth and Neil McNair have been bitter rivals for all of high school, clashing on test scores, student council elections, and even gym class pull-up contests. While Rowan, who secretly wants to write romance novels, is anxious about the future, she’d love to beat her infuriating nemesis one last time.

Tonight, she puts up with him.

When Neil is named valedictorian, Rowan has only one chance at victory: Howl, a senior class game that takes them all over Seattle, a farewell tour of the city she loves. But after learning a group of seniors is out to get them, she and Neil reluctantly decide to team up until they’re the last players left—and then they’ll destroy each other.

As Rowan spends more time with Neil, she realizes he’s much more than the awkward linguistics nerd she’s sparred with for the past four years. And, perhaps, this boy she claims to despise might actually be the boy of her dreams.

Tomorrow…maybe she’s already fallen for him.

I LOVED this! I’ve been a fan of Rachel Lynn Solomon since her hard hitting debut, You’ll Miss Me When I’m Gone, and her switch to a more light romantic comedy was just as magical. It’s really hard to successfully tackle a novel that takes place all in one day and this is probably the best I’ve ever read.

This is the ultimate enemies-to-lovers relationship. For the past four years, Rowan and Neil have been in constant competition with each other to be the top of their class. As the night unfolds, they start to learn more about each other, things that they haven’t told anyone else before. Despite working against each other their entire high school career, they don’t really know much about one another.

This was like a mini tour around Seattle as Neil and Rowan run around the city, playing this scavenger hunt/Assassin-type game for the senior class. Solomon did such a great job writing this love letter to Seattle and doing it with this kind of game was really clever. The pace of their relationship development was perfect—it felt very authentic. This is easily in my top reads of the year.