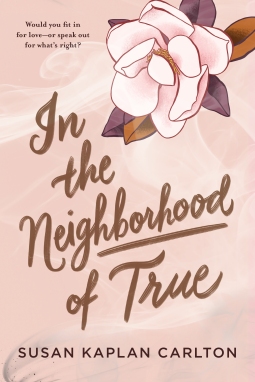 A powerful story of love, identity, and the price of fitting in or speaking out. After her father’s death, Ruth Robb and her family transplant themselves in the summer of 1958 from New York City to Atlanta—the land of debutantes, sweet tea, and the Ku Klux Klan. In her new hometown, Ruth quickly figures out she can be Jewish or she can be popular, but she can’t be both. Eager to fit in with the blond girls in the “pastel posse,” Ruth decides to hide her religion. Before she knows it, she is falling for the handsome and charming Davis and sipping Cokes with him and his friends at the all-white, all-Christian Club. Does it matter that Ruth’s mother makes her attend services at the local synagogue every week? Not as long as nobody outside her family knows the truth. At temple Ruth meets Max, who is serious and intense about the fight for social justice, and now she is caught between two worlds, two religions, and two boys. But when a violent hate crime brings the different parts of Ruth’s life into sharp conflict, she will have to choose between all she’s come to love about her new life and standing up for what she believes.

It’s crazy that this is a book taking place in the 1950’s, yet we are still having the same conversations about race and religion today in 2020. While the characters, relationships, and the overarching plot are fictional, this is based off a true event—a bombing of a Jewish temple in Atlanta in 1958.

It was nice to read a piece of Jewish historical fiction novel that didn’t focus on the Holocaust. Of course the main focus during this time period and the Civil Rights movement is usually on racial discrimination as the country is slowly working towards desegregation. However, there was also also hate and discrimination within religion and because a person usually doesn’t outwardly “look” Jewish, it’s something a person can keep hidden about themself—like what Ruth does in the book.

For a topic that is pretty heavy, I was expecting more depth in the the characters and their relationships—everything was pretty surface level. Why did Ruth and Davis like each other? All the really did was make out, but after a few weeks they are dolling out “I love you’s” and promise rings. I know that things were different back then, but it just made their relationship very unrealistic. The ending felt very rushed and seemed to leave out a lot of important information.

There were somethings that I did enjoy. Ruthie had feisty rebellious moments that made me want to get to know her more, especially when it came to the whole debutante meetings. I wanted to see more of that because I think Ruth’s perspective would have been really entertaining.  I loved her relationship with her sister Nattie—you could tell that they really genuinely liked each other despite a big age difference. Ruth and her grandfather seemed to de developing a nice relationship towards the end and of course I loved Max—an older “Buddy Holly”-type.

Overall, despite what this was lacking, I did enjoy the book. I just wanted more.

One thought on “In The Neighborhood of True Blog Tour”