Something about me: I’ve been sick for about nine years. It all started New Year’s Eve 2008, halfway through my senior year of high school.  I had my very first migraine and from that day on, I’ve had some type of headache every day.  Every day for the past nine years.  Then in the middle of college, I was diagnosed with fibromyalgia.  Strange word, right? Fibromyalgia is a disorder that causes widespread pain, fatigue, memory issues, and basically anything else that can go wrong with your body.  One way to look at it: my body feels like a gigantic bruise.  My headaches only added to the problem.  I spent a lot of time stuck in bed. I STILL spend a lot of time stuck in bed. 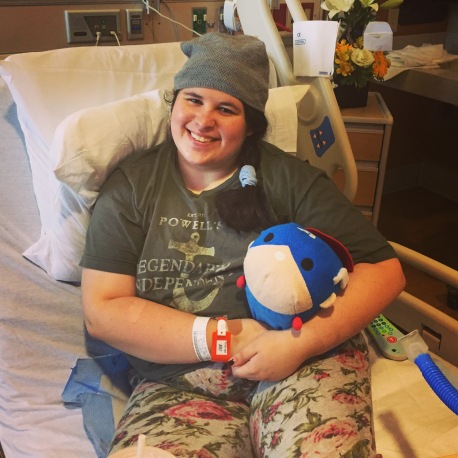 So, I had been been going through life feeling pretty miserable when BAM, brain tumor. A brain tumor that had nothing to do with my daily chronic headaches.  Pretty shitty, right? So many people were so relieved that doctors had found a reason for my head pain when really it was just an added bonus. I had my brain surgery in October 2015 and was tumor free for a little over a year.  Unfortunately, it came back with a vengeance and I was sent to radiation—time to zap the sucker to death.  A year later my tumor is still rattling around in my noggin, albeit a little smaller, and I have to get it checked every six months.

Why did I unload all this on you?  Well, I saw a trailer for the Sundance award-winning documentary Unrest sometime last year and I couldn’t wait for it to come out.   Unrest chronicles the life of a woman, Jennifer Brea, who is diagnosed with Chronic Fatigue Syndrome (CFS)—otherwise known as Myalgic Encephalomyelitis (ME). She directed the movie mostly from her bed, a lot of times talking to people from around the world only through Skype. 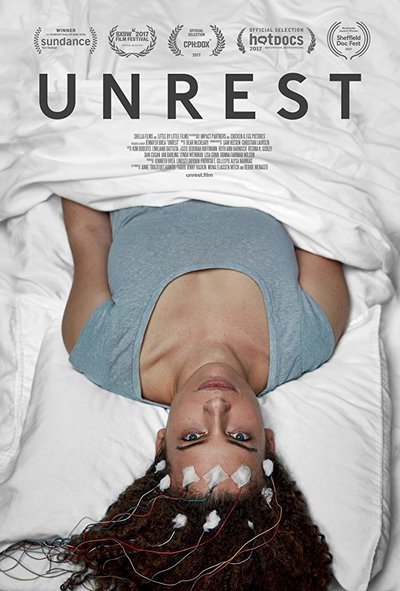 CFS is a tremendously complex disorder that causes extreme fatigue.  Some people might think, “Oh, so you’re just really tired.”  But they had no idea.  About half-way through my radiation treatments, I hit a wall.  One of the effects of fibromyalgia is fatigue, so I knew what it felt like to be exhausted all the time.  This was like nothing I had ever experienced.  Imagine a gigantic cinderblock sitting on your entire body.  It took so much out of me just to get dressed in the morning.  After watching this movie, I realized I hadn’t experienced an ounce of what people with CFS deal with every day.  These people, mostly women, are so bedridden that their bodies start to seize up, they are talking complete gibberish, and can’t even lift their head to for a drink of water. You followed Brea through her struggle to get an actual diagnosis, something I really connected to.

When you have a sickness that is invisible to the outside world, you run into people—doctors—who doubt you.  I can’t tell you how many times I’ve had so many doctors have said to me that “it’s all in your head” and that I was “too young” to be this sick.  Different people in the doc shared their stories about not being taken seriously; in Denmark, people were being taken away from their families to be committed because doctors were only acknowledging CFS as a mental disorder, having nothing to do with the physical.  I cried watching this movie, seeing people go through struggles that I related to so much.  I hope more people see Unrest and understand that CFS and other chronic illnesses as simply being “too tired”, but it’s a real disorder that many people face and its greatly lacking in funding.  It’s now on Netflix, so you really have no excuse.

Thanks for reading and send me any questions about chronic pain! I plan to talk more about the chronic illness side of my life on here from time to time.  I’ve only touched the tip of the iceberg of my sickness journey.

3 thoughts on “Unrest and Chronic Pain”