Can life begin again…every other weekend?

Adam Moynihan’s life used to be awesome. Straight As, close friends and a home life so perfect that it could have been a TV show straight out of the 50s. Then his oldest brother died. Now his fun-loving mom cries constantly, he and his remaining brother can’t talk without fighting, and the father he always admired proved himself a coward by moving out when they needed him most.

Jolene Timber’s life is nothing like the movies she loves—not the happy ones anyway. As an aspiring director, she should know, because she’s been reimagining her life as a film ever since she was a kid. With her divorced parents at each other’s throats and using her as a pawn, no amount of mental reediting will give her the love she’s starving for.

Forced to spend every other weekend in the same apartment building, the boy who thinks forgiveness makes him weak and the girl who thinks love is for fools begin an unlikely friendship. The weekends he dreaded and she endured soon become the best part of their lives. But when one’s life begins to mend while the other’s spirals out of control, they realize that falling in love while surrounded by its demise means nothing is ever guaranteed.

Jolene and Adam only see each other two times a month—every other weekend. From the beginning the two were drawn together, despite their living situations being less than ideal.  When she’s not stuck with her alcoholic mother, Jolene is forced to live in close quarters with her dad’s girlfriend. After a major tragedy in their family, Adam and his brother are forced to leave their emotionally fragile mother to spend weekends with their dad.

I really loved these characters. The were fun and spunky, but flawed and realistic characters. I really loved Adam and Jolene’s relationship and their slow burn. They were up front with their feelings but didn’t rush into things – they had their own shit to figure out before they could focus on love.

Despite loving the characters, I felt like it lacked focus. It was really long for a YA contemporary, clocking in at 512 pages.  The big climax moment happens 3/4 of the way through the book with very little build up, almost out of nowhere. If the story was more focused on that one storyline for the entire book, then it would have been very compelling and interesting. There was just a lot of extra baggage that wasn’t needed. 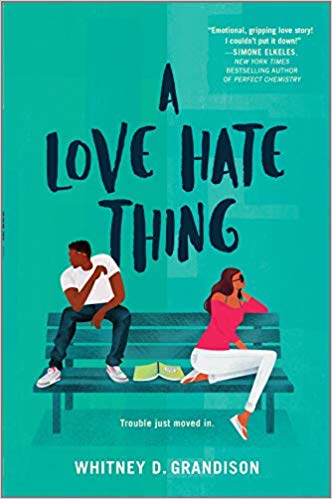 When they’re stuck under one roof, the house may not be big enough for their hate…or their love.

When Tyson Trice finds himself tossed into the wealthy coastal community of Pacific Hills, he’s ready for the questions, the stares and the feeling of not belonging. Not that he cares. After recovering from being shot and surviving the rough streets of Lindenwood, he doesn’t care about anyone or anything, much less how the rest of his life will play out.

Golden girl Nandy Smith has spent most of her life building the pristine image that it takes to fit in when it comes to her hometown Pacific Hills where image is everything. After learning that her parents are taking in a troubled teen boy, Nandy fears her summer plans, as well as her reputation, will go up in flames.

Now with Trice living under the same roof, the wall between their bedrooms feels as thin as the line between love and hate. Beneath the angst, their growing attraction won’t be denied. Through time, Trice brings Nandy out of her shell, and Nandy attempts to melt the ice that’s taken Trice’s heart and being. Only, with the ever-present pull back to the Lindenwood streets, it’ll be a wonder if Trice makes it through this summer at all.

Tyson Trice has no one left when he is shipped off from the mean streets of Lindenwood to the upper class suburbs of Pacific Hills to live with family friends that he hasn’t seen since childhood. Nandy has the perfect life and won’t let it be ruined when her parents let a stranger move in to their home.

I love the friends-to-lovers trope so much, but this really disappointed me. The basic overall story had a lot of potential. I liked that we were dropped right into the story and then given backstory as the story slowly progressed. I just don’t think the story was executed very well. You could tell this was a debut novel. A lot of characters would be introduced and then we would never hear from them again. The writing got too redundant as the story dragged on. I felt like Nandy and Tyson would have the same conversation or argument constantly, without any change to the dialogue.

With the tough subject manner, I expected the writing to be better. It needed to go through another editing pass or something.  There was a short time jump (a month) that felt like I missed a whole chunk of the book—it could have transitioned a lot better. While I was gripped to the end, it was more for the the characters and to reach a resolution. 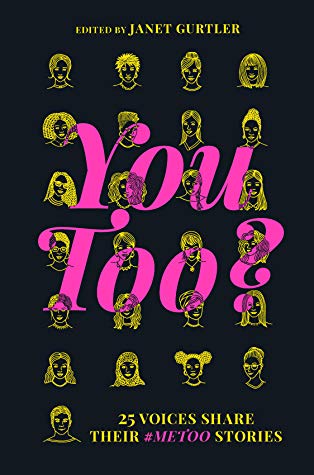 When #MeToo went viral, Janet Gurtler was among the millions of people who began to reflect on her past experiences. Things she had reluctantly accepted—male classmates groping her at recess, harassment at work—came back to her in startling clarity. She needed teens to know what she had not: that no young person should be subject to sexual assault, or made to feel unsafe, less than or degraded.

You Too? was born out of that need. By turns thoughtful and explosive, these personal stories encompass a wide range of experiences and will resonate with every reader who has wondered, “Why is this happening to me?” or secretly felt that their own mistreatment or abuse is somehow their fault—it’s not. Candid and empowering, You Too? is written for teens, but also an essential resource for the adults in their lives—an urgent, compassionate call to listen and create change.

Wow. This was extremely powerful. The #MeToo movement sparked a very important discussion that needed to be addressed a long time ago. This is a collection of essays from YA and MG authors, was inspired by this movement that hit the world in 2017.

As more and more stories started to come out, it made you think about your own life and experiences. The things that you brushed off as normal, were actually not okay. Physical assault or verbal assault. A common thread that was woven throughout all of the stories in this anthology was the shame people felt and the blame they put upon themselves: Did I dress to provocatively? Was I too forward, trusting? Was it my fault? Why didn’t I speak up? For some of these authors, the trauma they experienced as children shaped the rest of their life and how they perceived themselves and men. Others only just realized the incidences that they may have brushed aside over the years were more significant and alarming than they thought.

This movement has opened the eyes of so many people to the harsh realities that people face—not just for women and not just in the entertainment industry. However, there is still a long way to go. Predators are still getting away with their crimes, and victims are still being dismissed when coming—if they even come forward at all.

This is such an important piece of work that should be read by all teens. It could be so beneficial in more ways than people might realize.