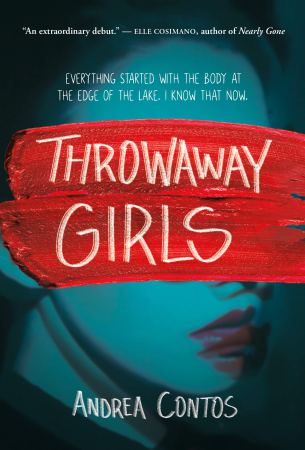 Caroline Lawson is three months away from freedom, otherwise known as graduation day. That’s when she’ll finally escape her rigid prep school and the parents who thought they could convert her to being straight.

Until then, Caroline is keeping her head down, pretending to be the perfect student even though she is crushed by her family and heartbroken over the girlfriend who left for California.

But when her best friend Madison disappears, Caroline feels compelled to get involved in the investigation. She has her own reasons not to trust the police, and she owes Madison — big time.

Suddenly Caroline realizes how little she knew of what her friend was up to. Caroline has some uncomfortable secrets about the hours before Madison disappeared, but they’re nothing compared to the secrets Madison has been hiding. And why does Mr. McCormack, their teacher, seem to know so much about them?

It’s only when Caroline discovers other missing girls that she begins to close in on the truth. Unlike Madison, the other girls are from the wrong side of the tracks. Unlike Madison’s, their disappearances haven’t received much attention. Caroline is determined to find out what happened to them and why no one seems to notice. But as every new discovery leads Caroline closer to the connection between these girls and Madison, she faces an unsettling truth.

There’s only one common denominator between the disappearances: Caroline herself.

Caroline just needs to hang on for three more months, and then she can be rid of her small town and start living her life as her true, authentic self. All that gets complicated when her girlfriend leaves her and her best friend disappears. After going through her own issues with the police, Caroline can’t depend on them to find Madison. When she takes it into her own hands, she starts learning about other missing girls. Could all of these somehow be connected?

This was very entertaining and had me on the edge of my seat. The beginning was slow but it definitely picks up and by the end, I couldn’t read fast enough. For me, the twist and reveal came out of nowhere and I was really surprised—that always makes for a good mystery/thriller.

So why only 3.5 stars? I hated our main character, Caroline. Now, I’m totally on board for an unlikable character, but she was just mean, manipulative, and entitled. She kind of bullied her friends to help her, not caring what they had to give up to be there for her. Some of the things she did felt a little unbelievable like being gone from her home for days on end and never having to suffer any consequences for her actions. Yes, she is angry and hurt for some of the traumatic things she’s experienced, but that doesn’t give her the right to be awful.

I also feel like the plot was unnecessarily convoluted at times. The author tried to pack so many things into the mystery plot that it made it pretty confusing. She had a great story to begin with and didn’t need to add in a lot of nonsense that did nothing for the story.

So while this was entertaining, it was a little bit of a letdown.

A moving story of grief and healing – sure to be a pure joy for any musical theater aficionado.

Nettie Delaney has just been accepted into a prestigious performing arts school–the very same school her superstar mother attended. With her mother’s shadow hanging over her, Nettie has her work cut out for her–and everyone is watching. To make matters worse, Nettie hasn’t been able to sing a single note since her mother died. Whenever she tries, she just clams up. But if Nettie’s going to survive a demanding first year and keep her place in a highly coveted program, she’ll have to work through her grief and deliver a showstopper or face expulsion.

All may not be lost, however, when Nettie stumbles upon a mysterious piano player in an empty studio after class. Masked behind a curtain, can Nettie summon the courage to find her voice? Or will the pressure and anxiety of performing come crashing down?

All about finding and raising your voice, and not throwing away your shot, Vanessa Jones’s well-crafted journey of grief and healing will pull readers along with its strong narrative voice and satisfying sense of mystery.

As she attends the same performing arts school that her professional ballerina mother attended, Nettie works through her grief as she learns more about the mother she lost and most importantly, herself. Nettie lives and breathes musical theater, but ever time she tries to sing, her voice completely disappears, except when she finds herself in an empty rehearsal room with a mysterious accompanist.

Performing arts boarding school? A swoony romance? Grief and drama? Sign me up! Yes, this book was kind of made for me, but that doesn’t mean I can’t see it’s flaws. I definitely wished it was paced more efficiently The first few weeks progressed pretty slow and then months were going by without any mention. At almost 400 pages, things should have been spread out a little more evenly. Plot lines dropped off a little bit towards end, and I think Nettie’s progress with overcoming her issues with trauma in regards to her singing felt very rushed towards the end.  The main antagonist flipped halfway through the book which was kind of strange and as the story went on, actions and conversations started to feel redundant.

While this should have been a total success on summary alone, fell a little flat for me.

Well those are the first reviews of September! How is it already so far into the year? 2020 has gone by so fast, but also felt like it has lasted for three years.